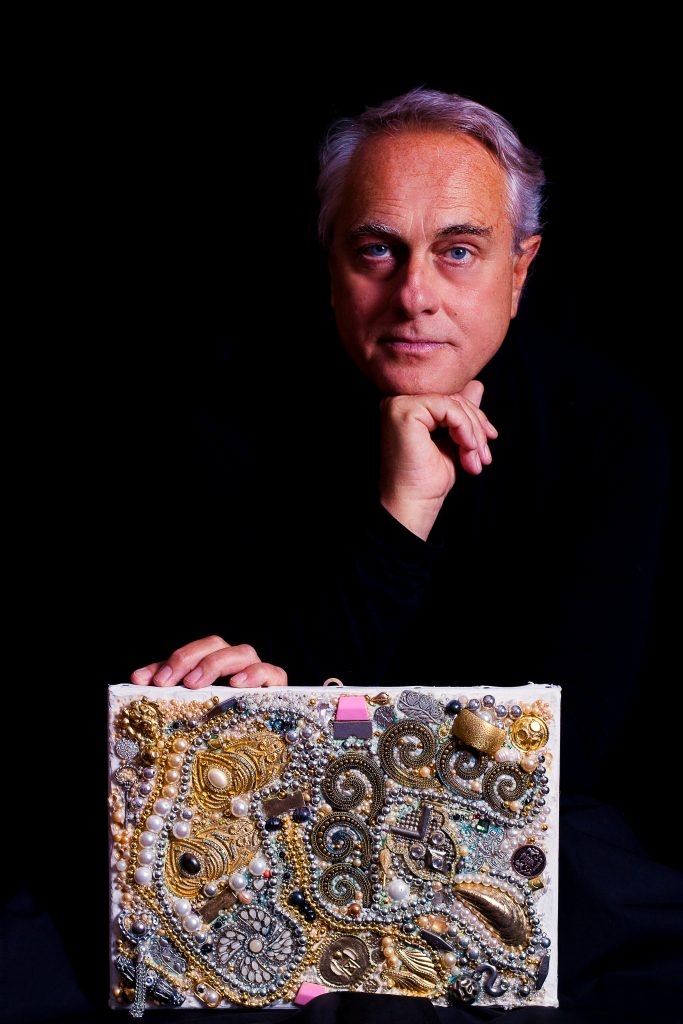 Rome-based sculptor, painter, writer, performances and installations Joseph Pace is among the most significant artist working today. His work has been shown in institutions and museums in throughout the world. From his performances and paintings of the early 1980s to his assemblage sculptures using thousand of pieces of rare fashion jewelry, Pace seamlessly combine the aesthetics of decorative arts with the modern sculpture, painting and engraving. Often fashion, history and decorative arts are referenced, with all their ambiguity, experimentation and humor associated with those philosophy and psychoanalysis. Pace’s works has been internationally recognized for its ability to reinterprets many of our psychic realities. Joseph Pace is one of the major exponents of the filtranisme movement.

Joseph Pace has a MA in Sociology with a specialization in French art and literature at the Sorbonne University in Paris, and a Ph.D in Political Science at the Roma Tre University. He has been Assistant Professor of “Sociology of art”, “Sociology of knowledge” and “History of sociology” at the Sapienza University From Rome. He has also collaborated with universities and international organizations for the protection of the artistic and cultural heritage.

Since his solo major exhibition at the Museu de arte do Parlamento di São Paulo in 2010, Pace’s work has been shown in institutions and museums in throughout the world. In 2021, his work was the subject of a major exhibition held at the Pantheon of Rome Joseph Pace: Ave Crus, Spes Una (14 September – 28 October 2021), which travelled to the Basilica of San Lorenzo in Lucina (1 November – 31 December 2021). In 2014, the National Gallery of Modern Art of Rome organized a Pace’s major solo show at the Boncompagni Ludovisi Decorative Arts Museum Joseph Pace: L’Eva Futura (November 26, 2014 – February 13, 2015).

Joseph Pace is widely known for his paintings and his sculptures on exhibition at the Museum of Art of the Parliament of São Paulo, Museu Afro Brasil in São Paulo, Florence International Biennale, Museo Venanzo Crocetti in Rome. Others works were installed at the CRC in São Paulo, Forte Sangallo in Nettuno, Teatro Municipal de Jaguariuna, Diocesan Museum of Amalfi, Camara Municipal de Itapevi, Ostia International Film Festival.